In April 2017 Lego unveiled the new Lego Ideas Saturn V rocket, a project I had supported on Lego Ideas. As soon as I saw the final model and its price tag, I knew I had to get it.

The wait was rather long since it got sold out at the Lego online store on the very first day, but I was finally able to get it in July, around the time of the 48th anniversary of the first Moon landing (actually I built it around these days).

The set retails at 120€ and has 1969(!) pieces, and measures one meter high. It has an incredible attention to detail as you’ll see on the following photos. 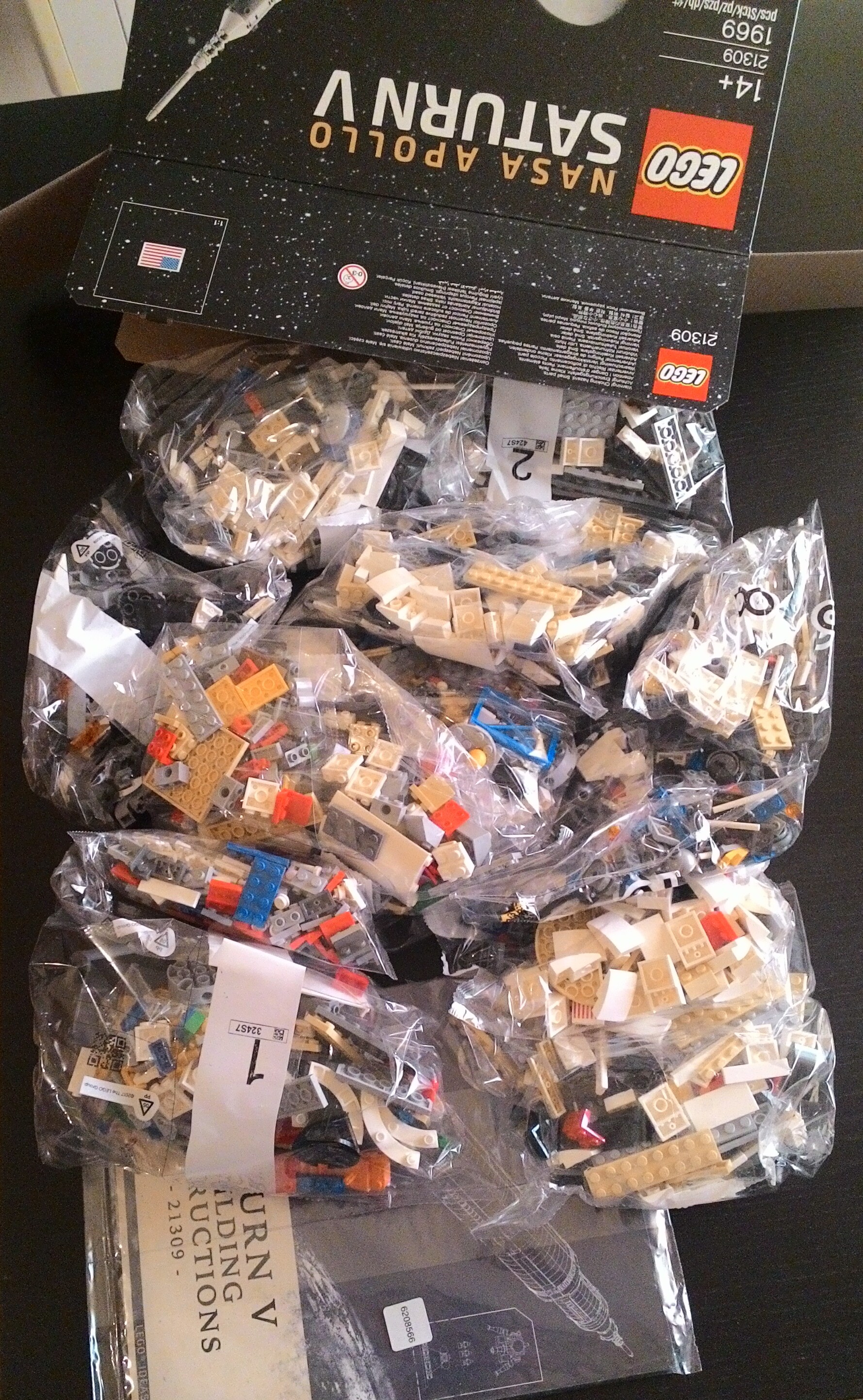 Inside the box there are 12 numbered bags and an instruction manual with a short description of the real rocket and how the model was designed by Lego. Experienced Lego builders may notice there are no stickers: all parts are printed! 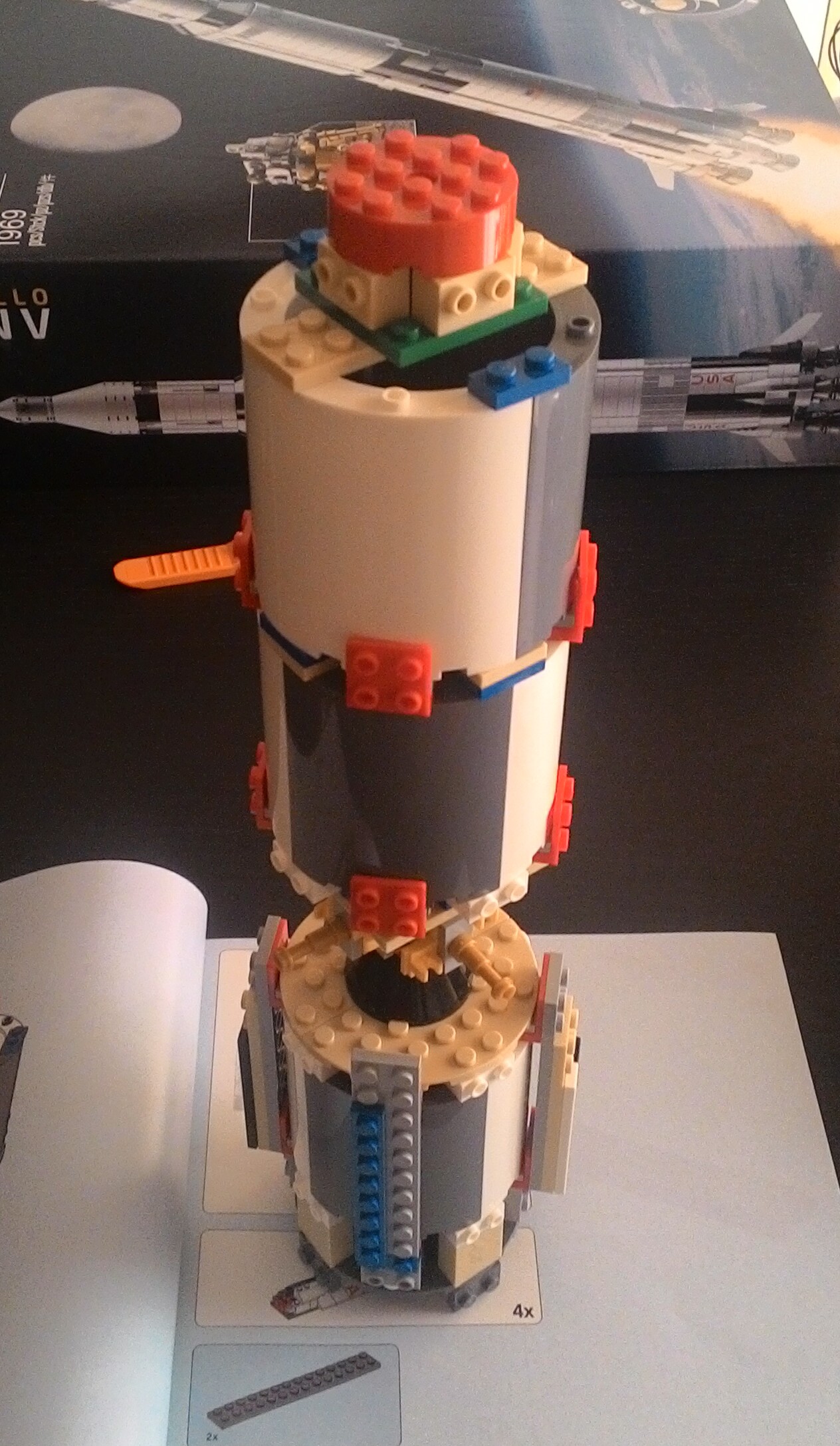 The stages of the rocket consist of an inner structure to give stability and to allow the outer panels to be attached. There’s a bunch of clever connections like seen above. The gap seen coincides with the riveted pieces that will be attached later. 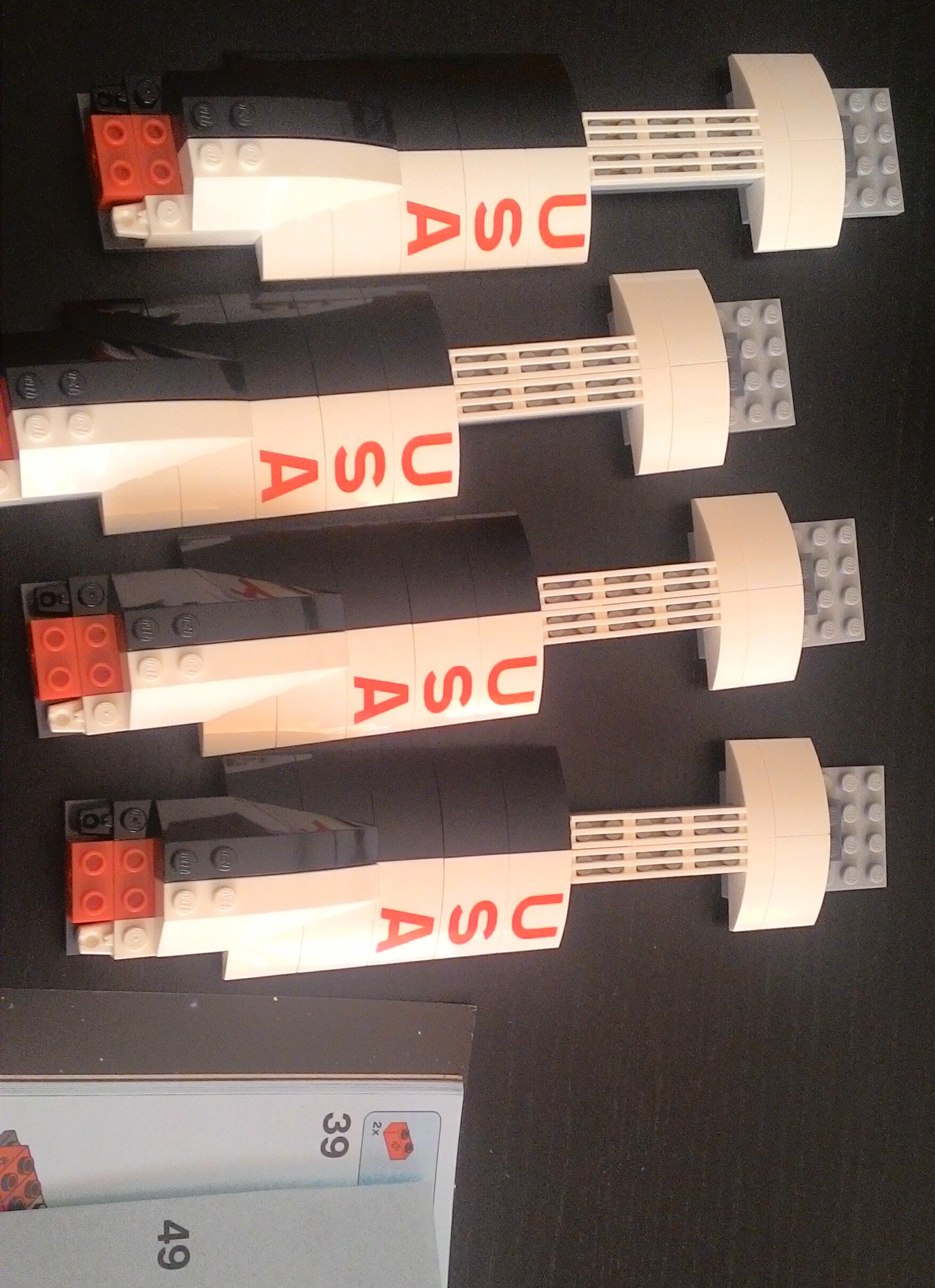 Some steps are repeated four times like with the above panel pieces, but even so the model is a very interesting build. 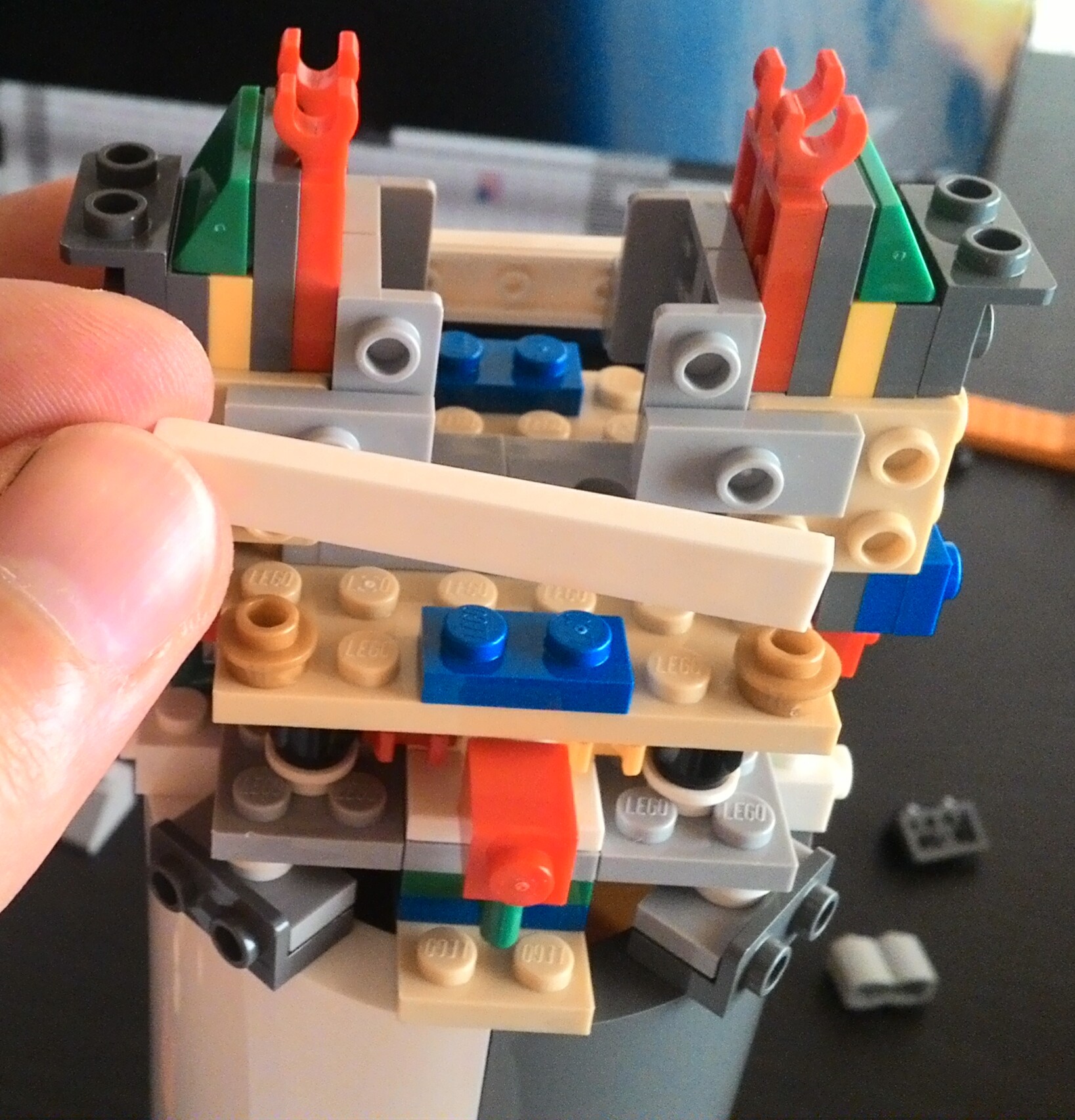 Strange use of pieces

I did scratch my head a few times due to the strange use of pieces. The above 6×1 panel piece is attached with jumpers instead of 2×1 flat pieces. The only reason I can think of is to cut costs, I suppose jumpers are slightly cheaper that 2×1 pieces, allowing Lego to keep the price of the model low. 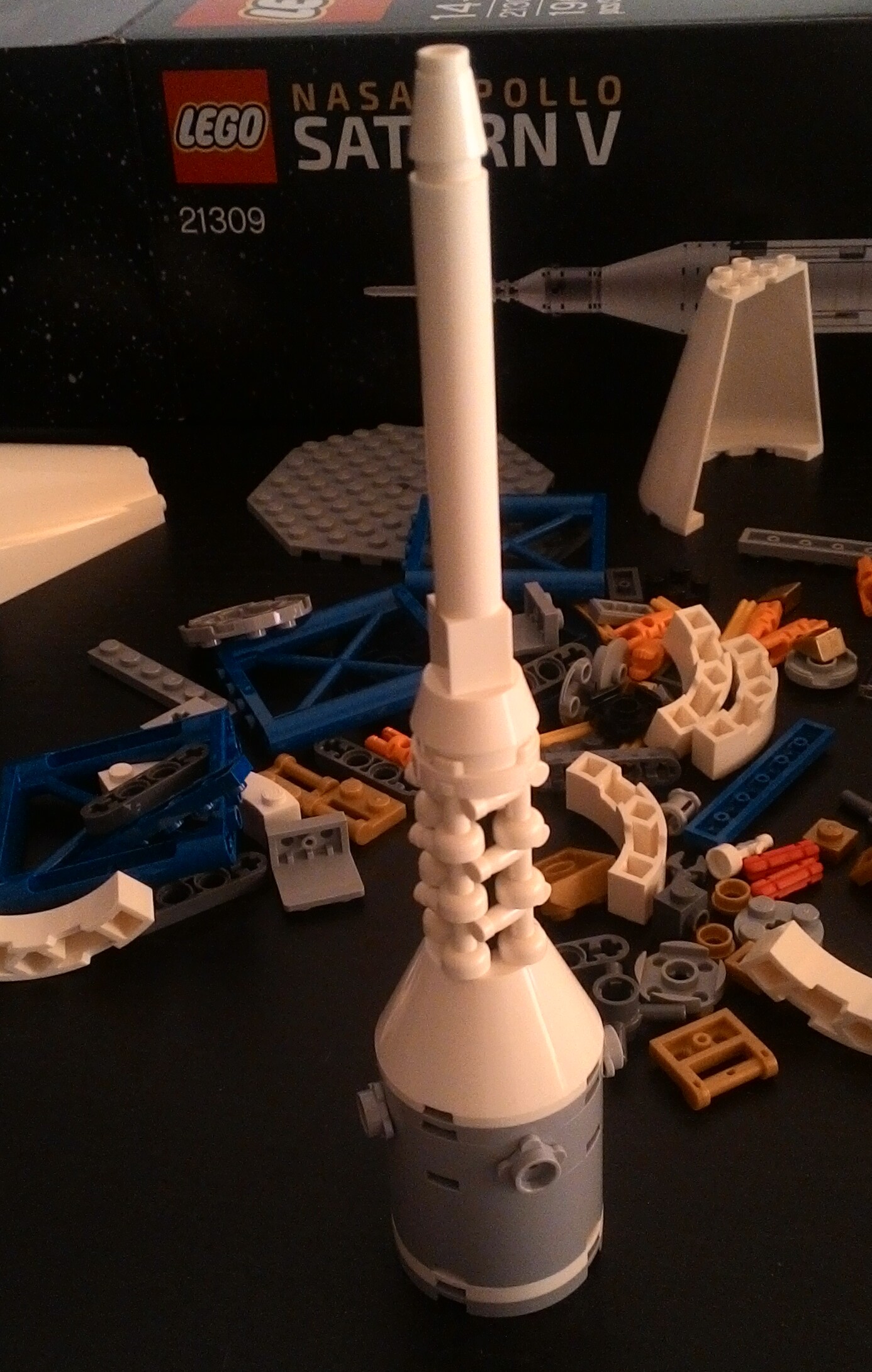 Instead of using a single trussed piece on the Launch Escape System Lego has used 16 nozzle pieces – genius! Since there’s a Technic axle through the center the structure is very solid and won’t come apart. 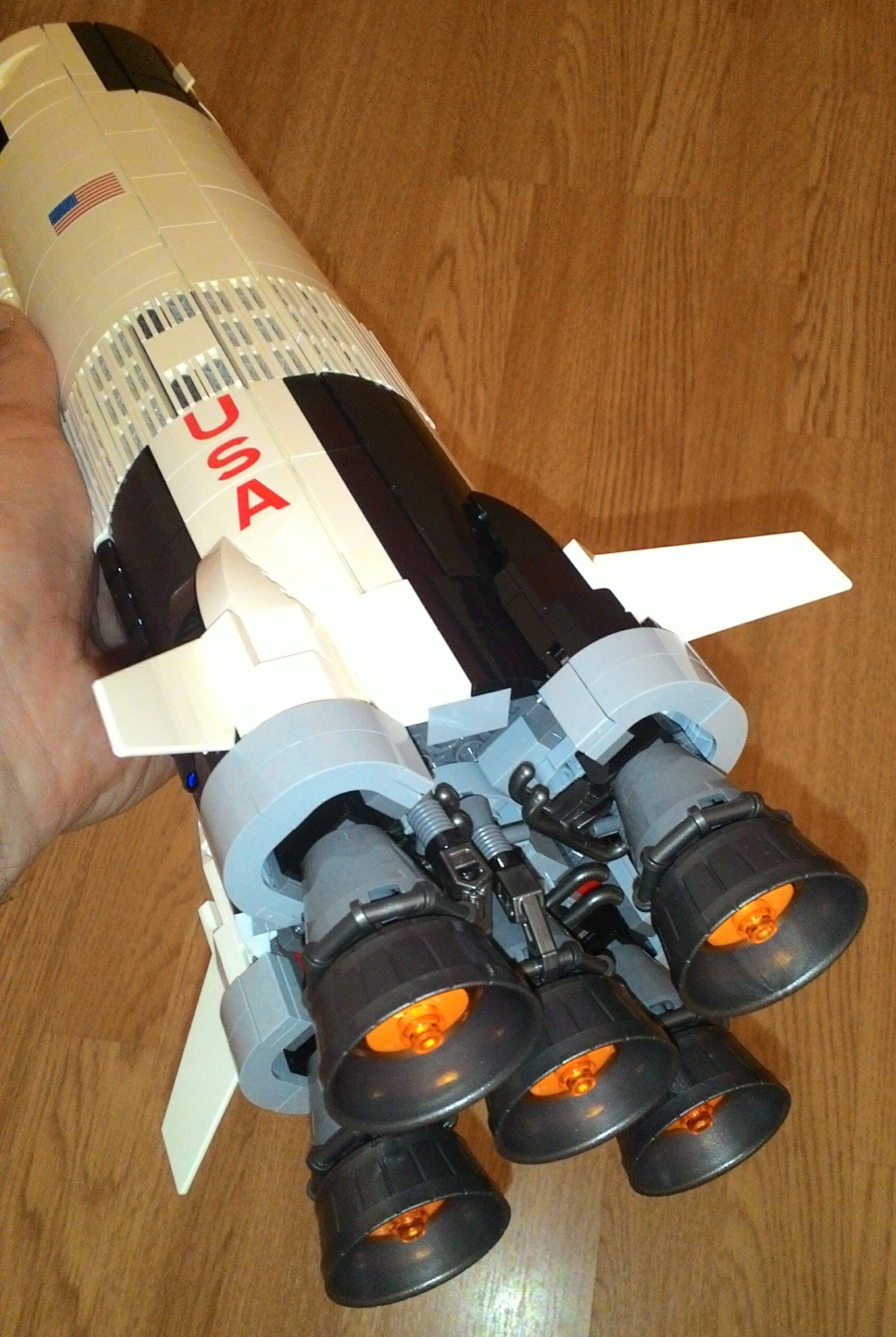 There’s an incredible level of detail to the F-1 engines on the first stage. the nozzles are made up of barrels in gun metal grey plastic. 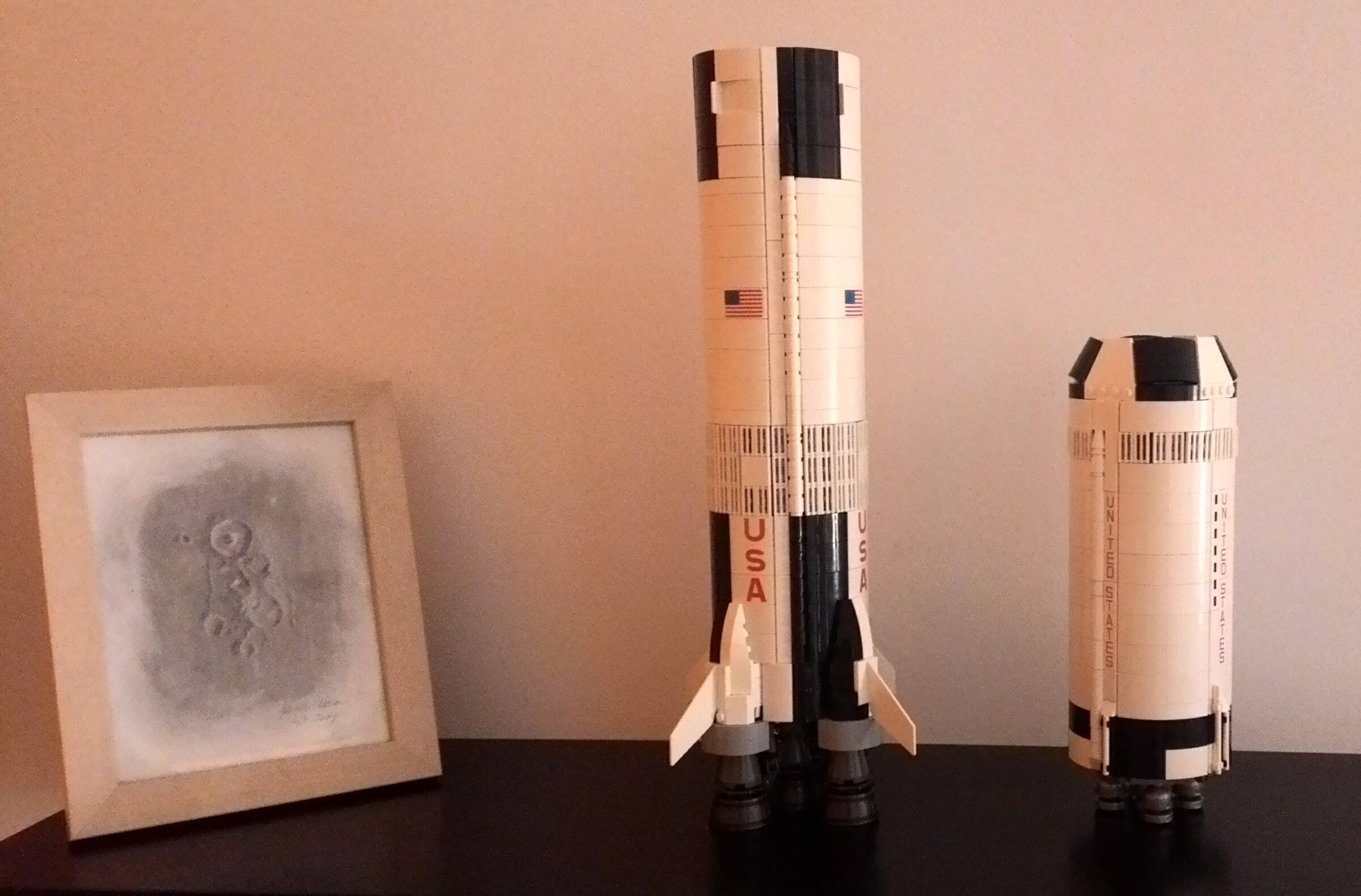 The 1st and 2nd stage finished together with a drawing I once made through a telescope of some Lunar craters. The stages are very robust and don’t easily fall apart. While I wouldn’t want to drop them, I have no fear of handling them and they have a very satisfying ‘click’ when they are put together. 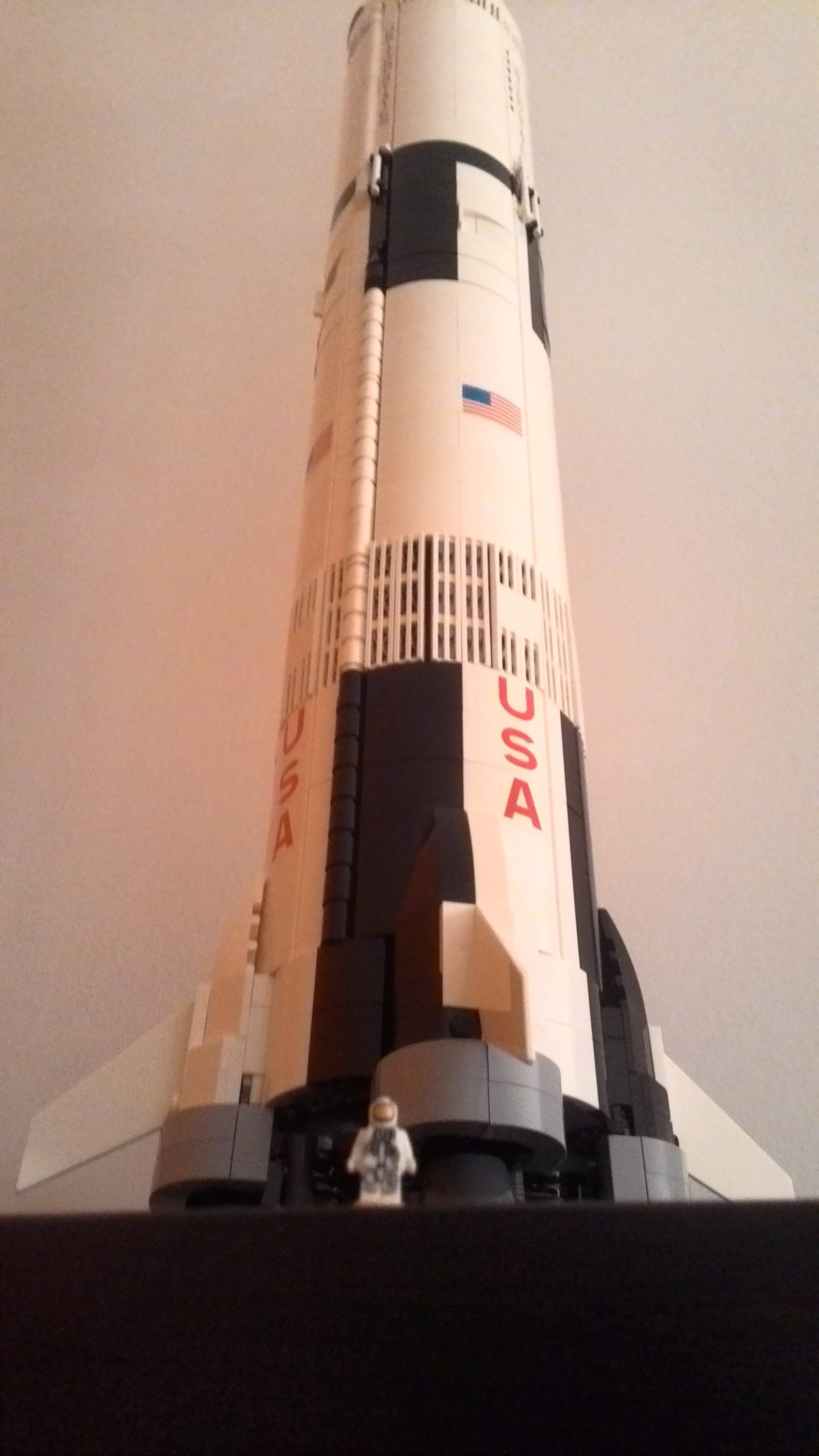 Lego has included 4 micro figures to scale. I’m not sure who the 4th astronaut is supposed to be, but here’s Mike Collins to indicate the gigantic proportions of the rocket. Truly a magnificent machine! 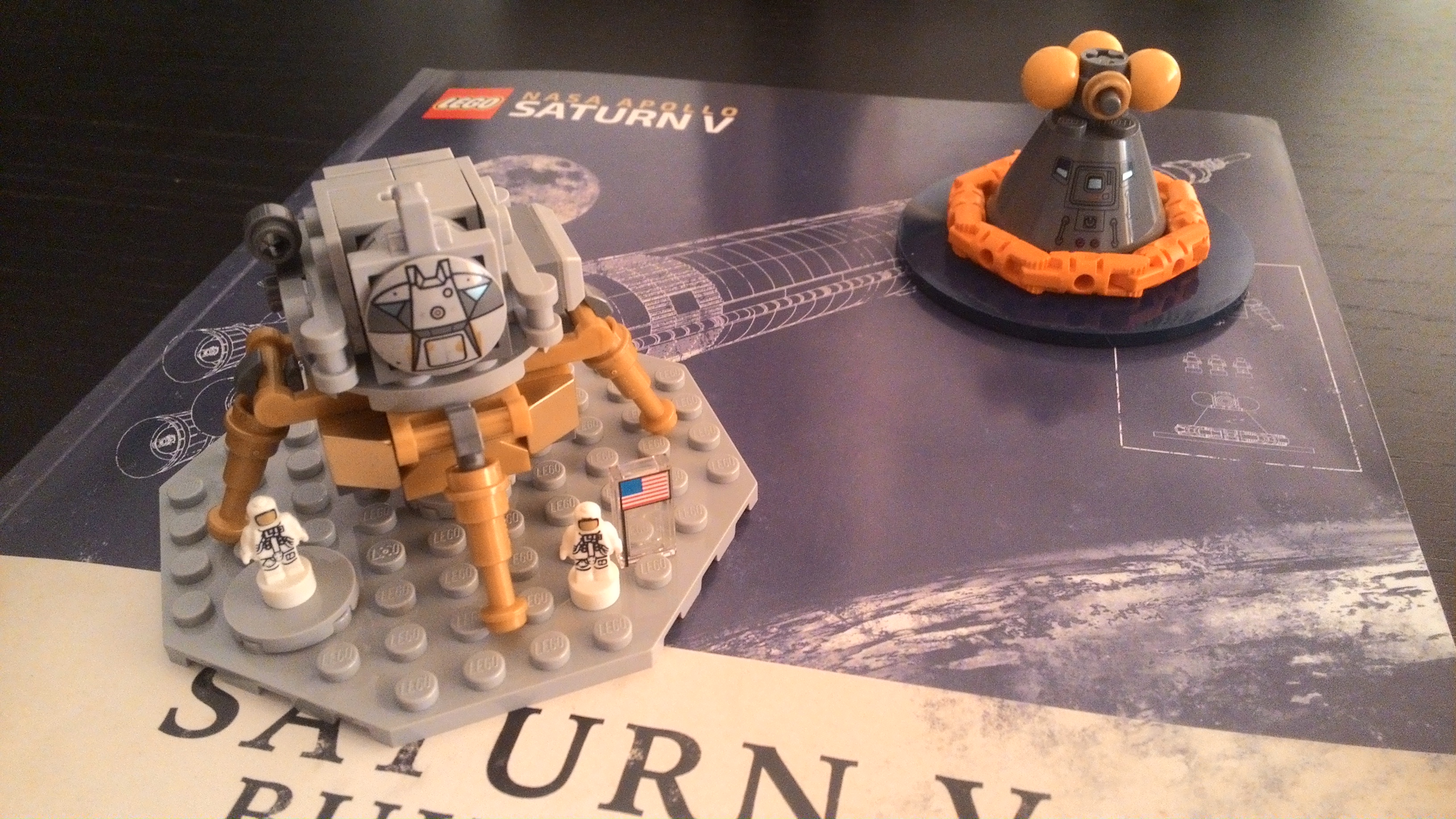 CSM splashed down and LEM on the Moon

Apart from the rocket, two smaller ‘vignettes’ are included: The Lunar Excursion Module (LEM) touched down on the Moon with Neil Armstrong and Buzz Aldrin, and the CM splashed down on Earth. The LEM can be put inside the rocket in its proper place just behind the CSM, while there’s an extra CM with its white protective cover for use on the rocket. 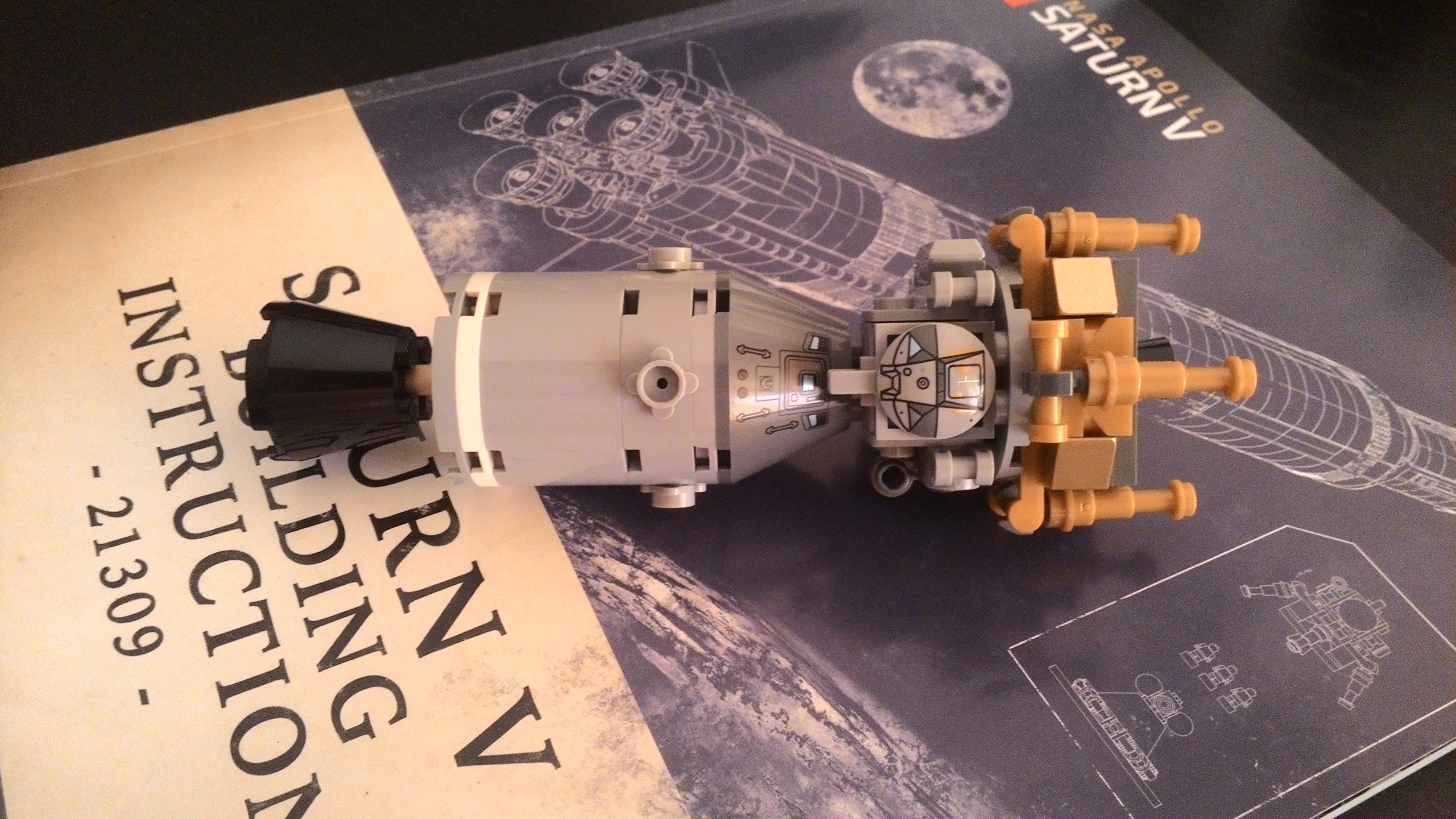 Another way to display the CSM and LEM as they would be on their way to and around the Moon. This does however use the Service Module from the rocket, as there are no spares. 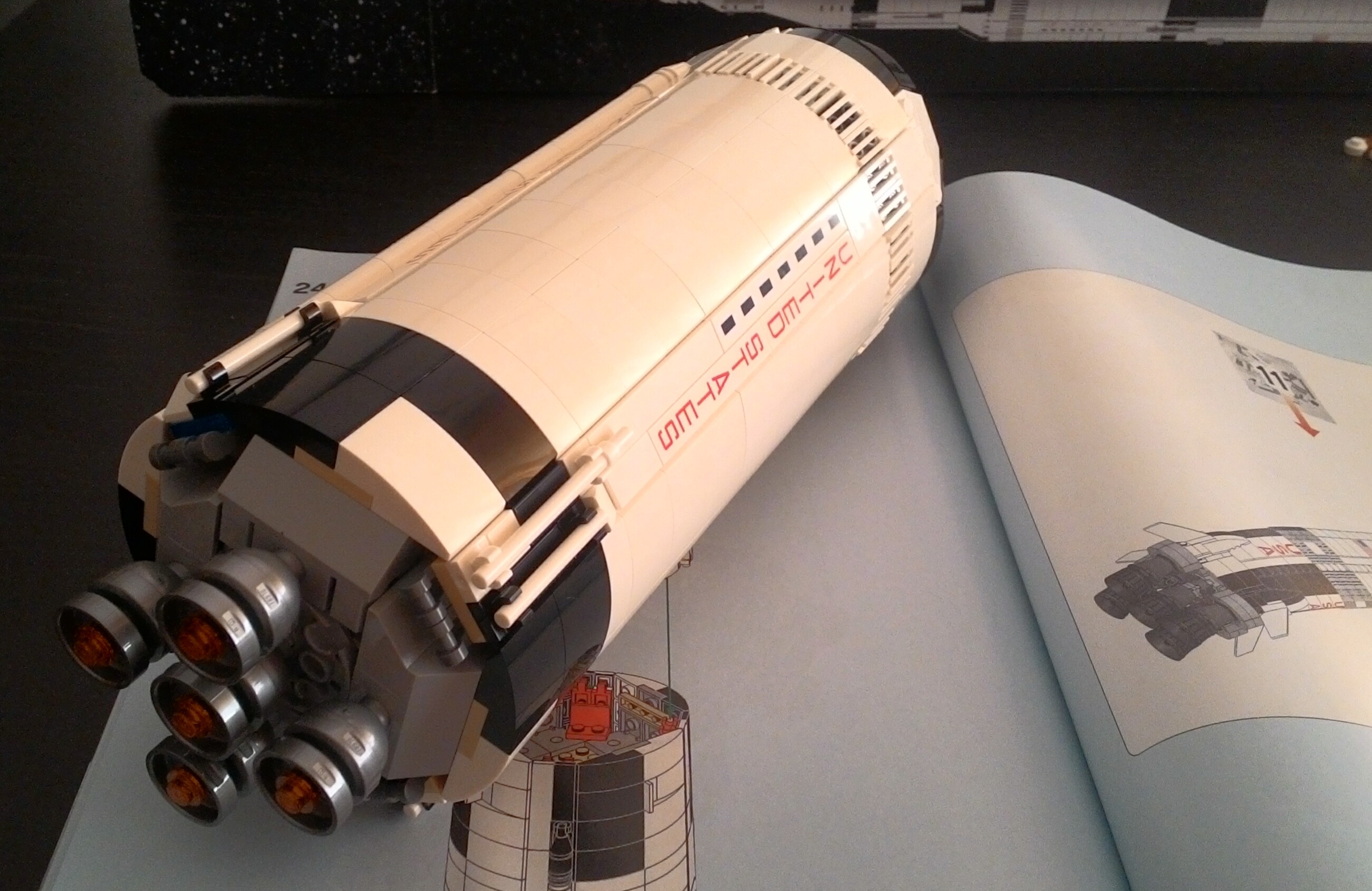 A closer look at the 2nd stage. The black dots is a printed piece, as well as the lettering of course. Both the 1st and 2nd stages are almost completely round, and made up of 2×3 curved pieces. I believe the technical term is SNOT, Studs Not On Top.

And lastly, the Lego Saturn V in all its glory! At 1 meter long, the model is a sight to behold, and in my opinion very well worth its 120€ price tag.

As a child I had dozens of Lego kits and several Lego Technic kits when I got older. In my opinion, the Saturn V is the best set Lego has ever made. It is a decorative, well-detailed model that is fun to build and stays very true to the original rocket. It is also very educational, since it allows one to simulate the Moon mission in all its steps. It’s no wonder it’s completely sold out everywhere as of the time of writing, but more will be on the way.

In the past few days I’ve been busy installing the brain of my Arduino Lego robot, namely the Raspberry Pi, and making a mount for the Raspberry Camera to allow it to pan and tilt. If you haven’t read the first entry of my robot blog, you can do so here.

The Raspberry Pi is running Gentoo Linux, my favourite Linux distro. Installation was straightforward using the wiki and cross-compiling the software on my Gentoo desktop. The Arduino is connected directly to the Raspberry via USB and communicates over serial. All my robot code is done in Python (except for C++ for the Arduino), but since I’m still working on that I’ll focus on the mechanical parts in this blog update. 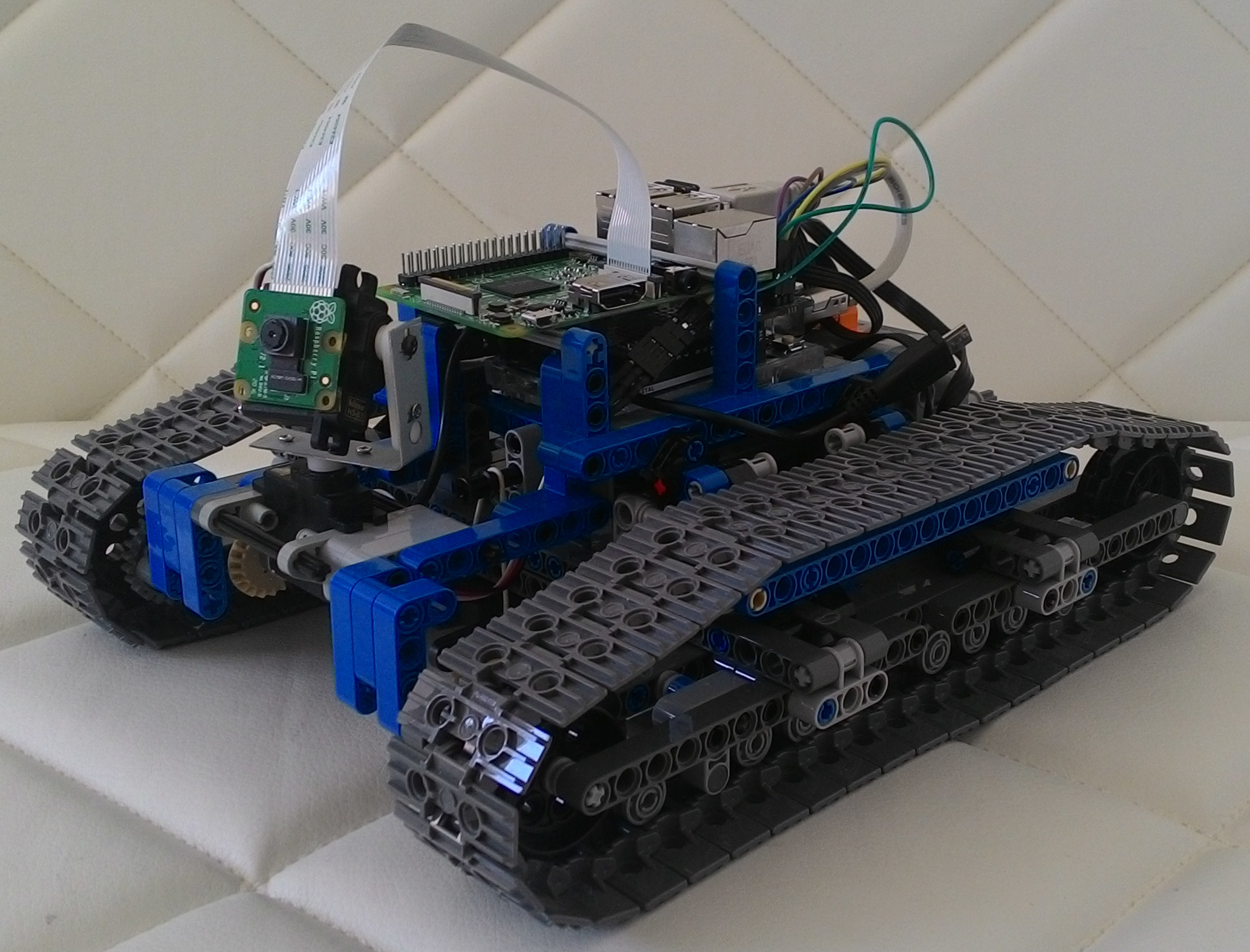 At this point the robot is basically completed mechanically.

I’ve installed the Raspberry Pi on top of the robot with some strategically placed Lego beams and axles. It sits just clear of the Arduino and its shield underneath it. The power supply for the Raspberry is a mobile phone power pack slung underneath the robot with rubber bands. The Arduino uses a 9V battery which also powers the 2 servo motors for the camera mount. Lastly, the robot Lego motors are powered by a Lego 9V (actually 7,2V) power pack on the back. 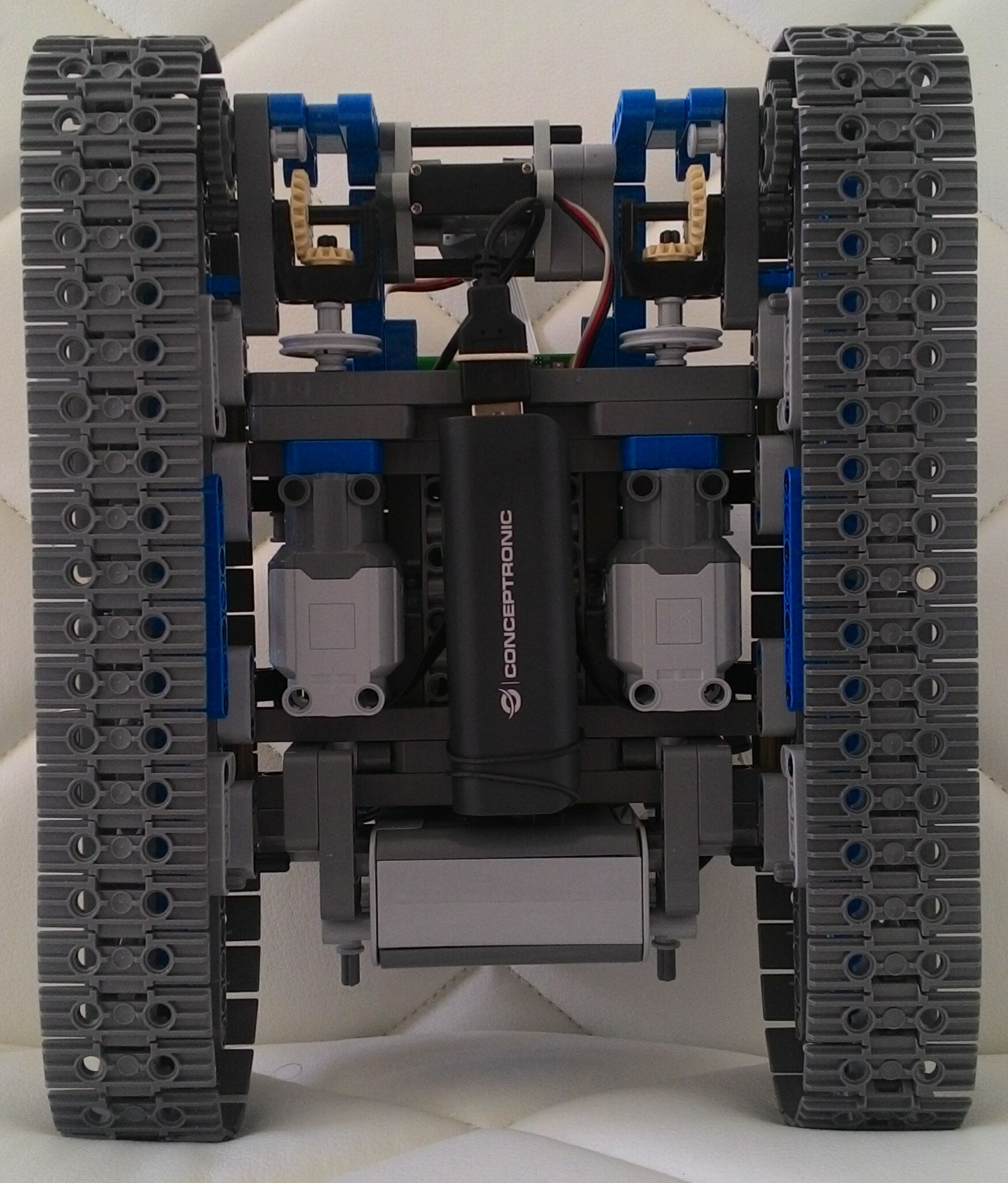 Underside view showing the battery pack for the Raspberry Pi and the 2 Lego motors.

I’m communicating with the robot via WiFi from either my desktop PC or laptop. At this time I just connect the Raspberry to my router but I’ll probably make a hotspot on my laptop to be able to take the robot out into the field. Since communications never leave the LAN I don’t experience too much lag and can easily pilot the robot in real time. 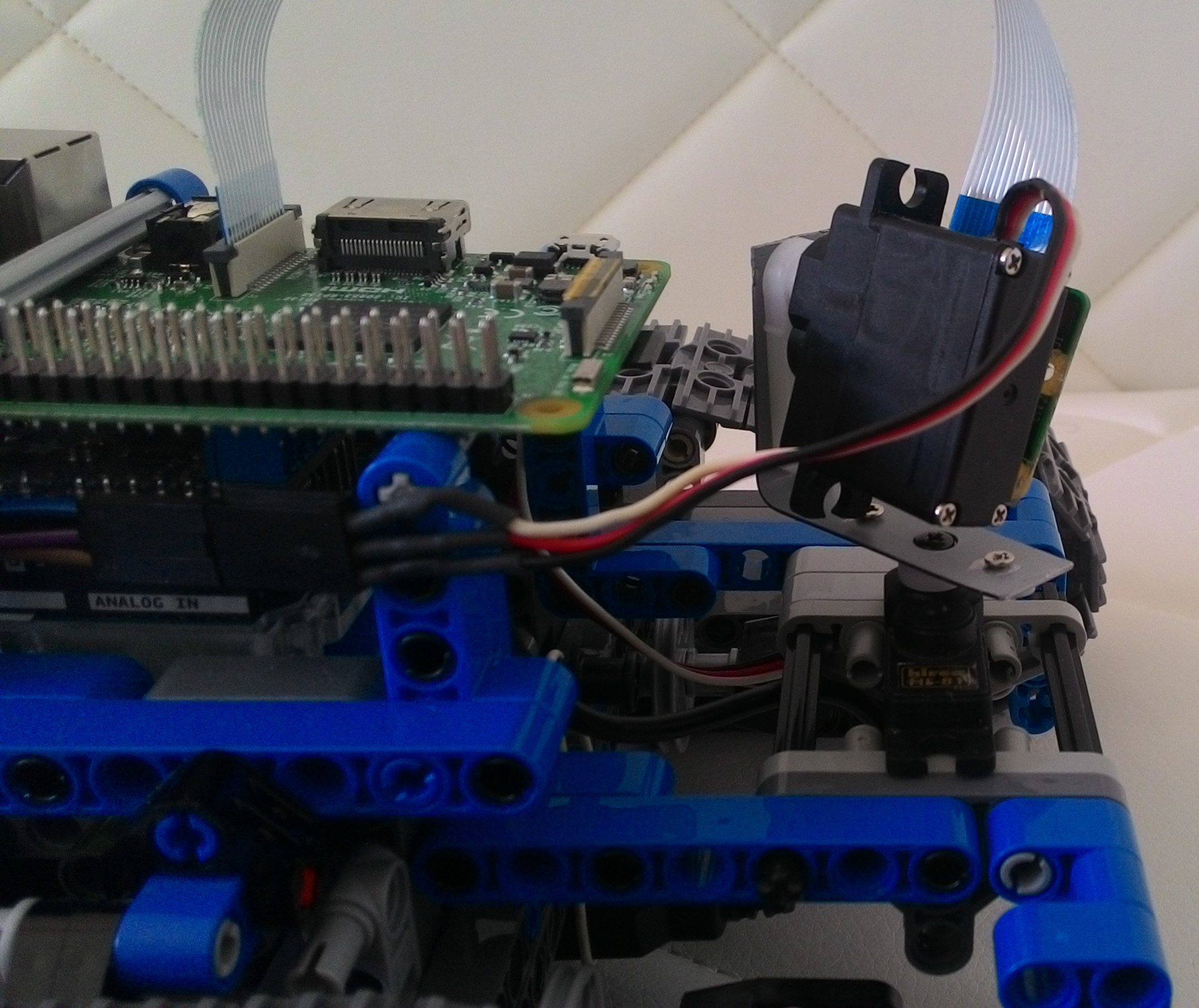 Due to the limitations of the servos the camera rotates only +/- 50 degrees from center (up and down). I think the servos are good up till +/- 70 degrees but I prefer to keep a margin not to damage them. As of now the camera is controlled from the PC with the arrow keys in 10 degree increments and a key to recenter it. It works well, but I’ll probably look into programming a more fluid movement, possibly using a gamepad. 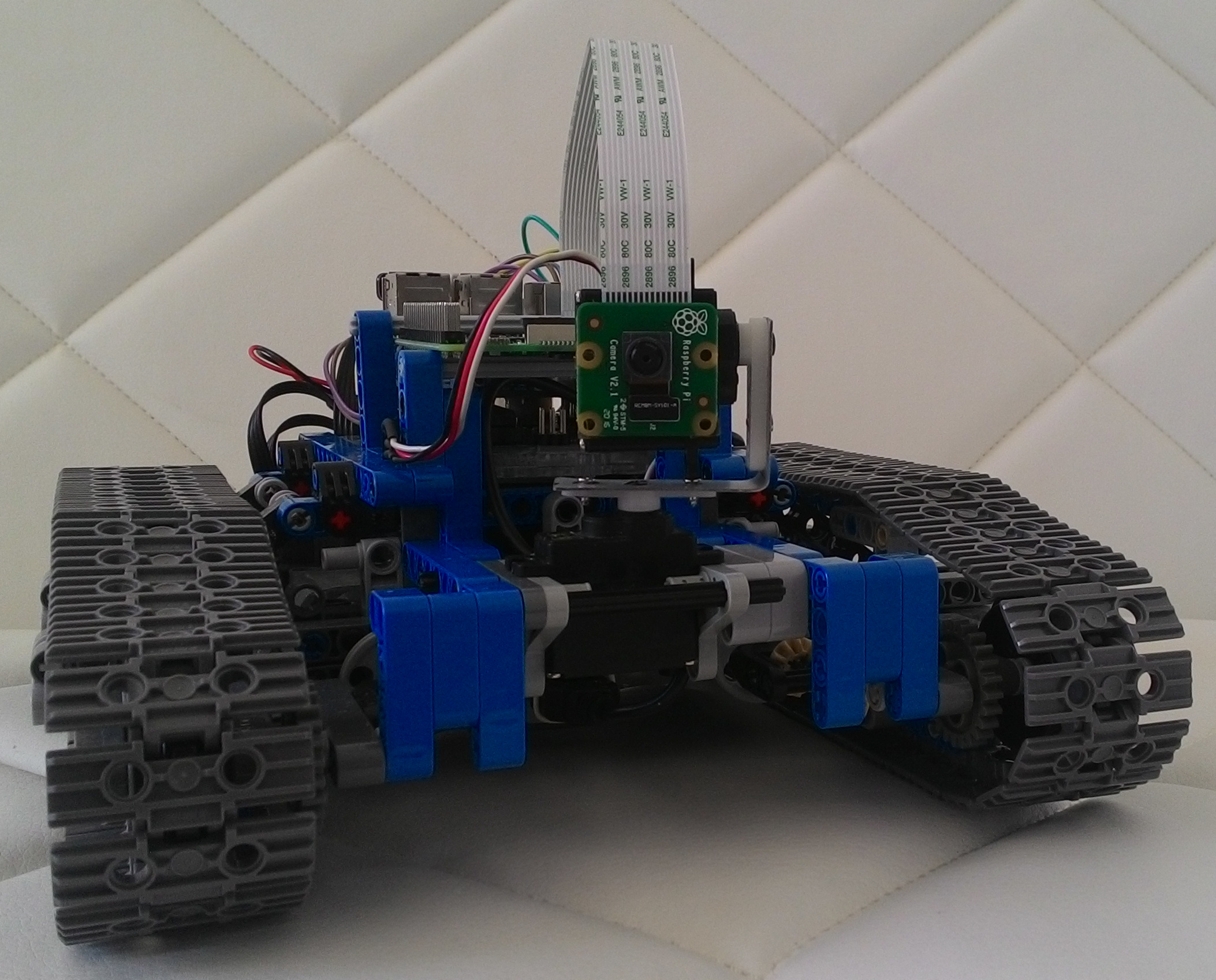 My next task will be modifying the code to show the live video feed within Pygame instead of a separate VLC window, and generally modifying and cleaning up my code. Especially the networking part needs a good look through.

Whenever I have something new to show I’ll write the next entry, but expect it to be focused on the software not the hardware. Oh, and I’ll soon make a video of the robot in action!

I’ve been building  an Arduino powered Lego tracked robot on and off for the past half year, and have finally come to the point where there’s something to show.

I didn’t take long to realize that I had to become proficient in programming and not just patch together other people’s code from the web, so I took a crash course in Python (using the excellent book Python Crash Course by Eric Matthes) and became familiar with C and C++ for the Arduino code.

After a few months of coding I’m finally at the point where it is all coming together. I’ve had the basic Lego robot built for months but never really programmed it to do anything other than running forward and stopping. The robot is built of parts from the Lego Crawler Crane kit (#42042), it’s basically the tracked base with some modifications like a motor for each track to allow steering. The motors are controlled via the Arduino (see my first blog entry), which in turn is controlled with a Python program on my PC via the serial monitor. The plan is to have a Raspberry Pi as the onboard PC, which in turn will be controlled via Wifi from another PC or laptop. 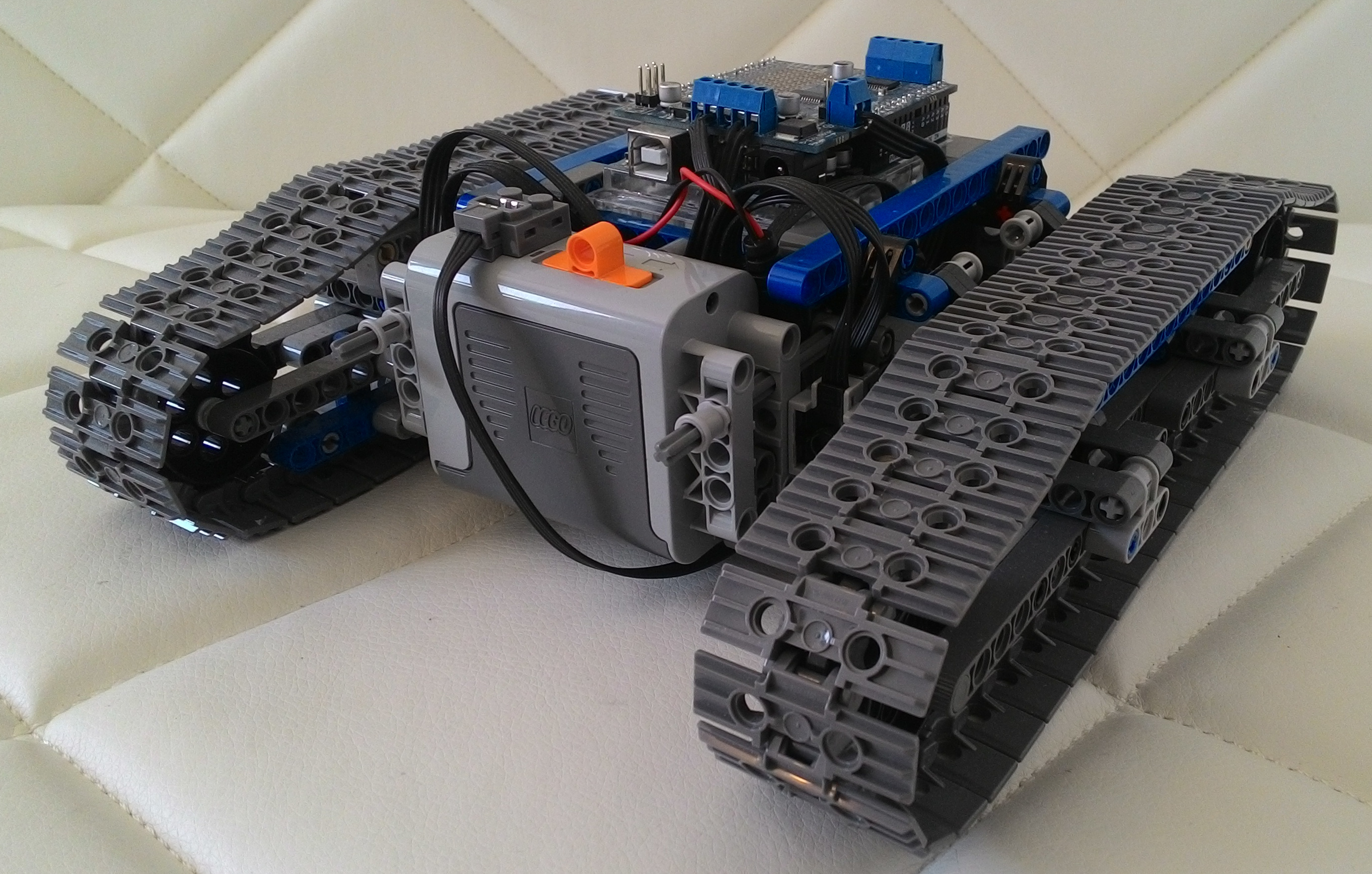 Back view of the robot 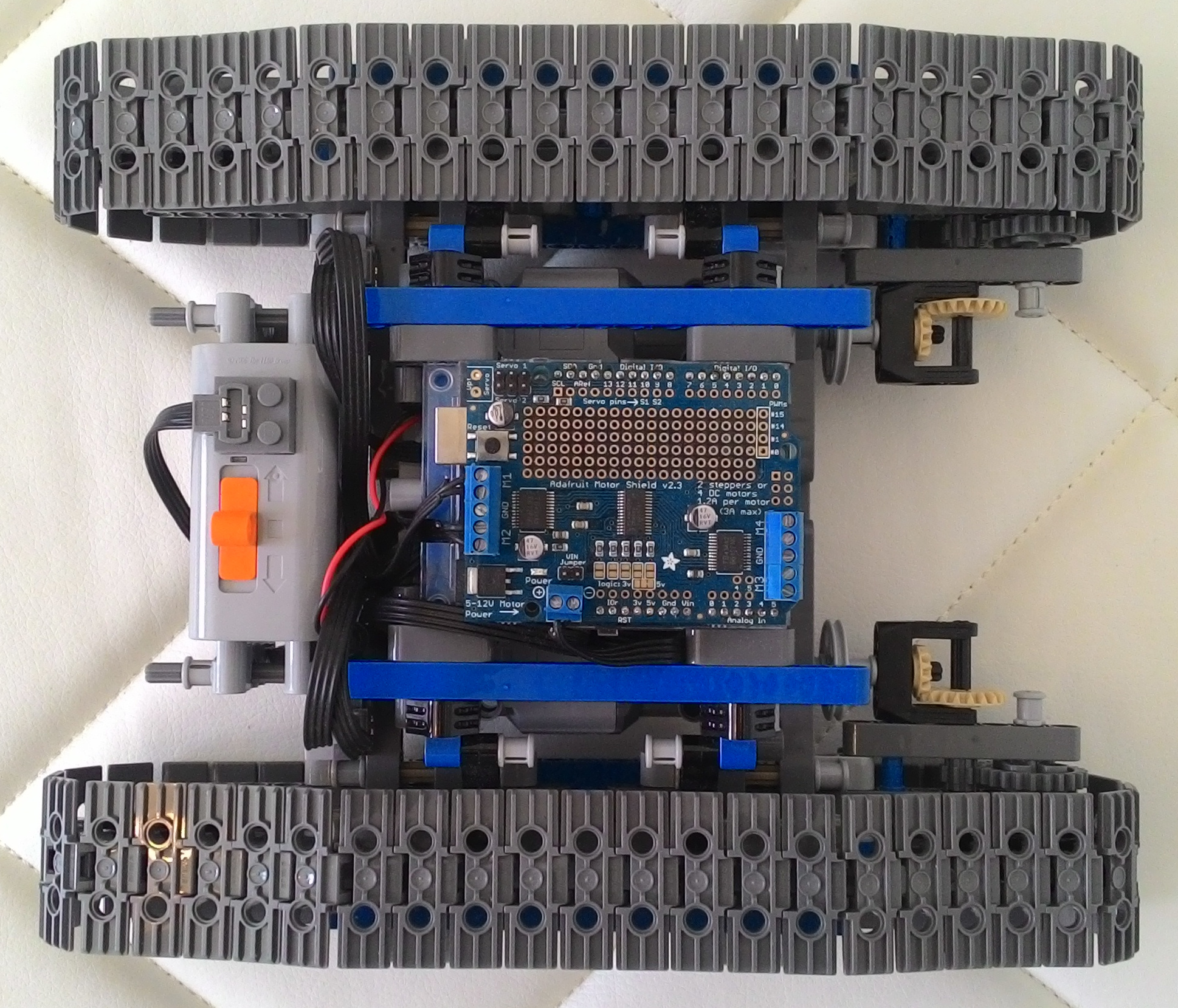 At the moment the robot is controlled with a simple Python program using the WASD keyboard keys, allowing forward and backward movement and turning. This works relatively well, with about a 1 second delay.

I took the video below when testing the serial communications; at that point I had only programmed forward movement.

I have attached the Arduino code below. It waits for a serial command to actuate the motors. If you intend to use this code yourself, be aware that some lines may be split because of the narrow WordPress theme format (should be fixed by now).

The Python code uses pygame to grab the keystrokes and send them to the Arduino via serial. I’ll split this program into two, one for the PC to send the commands and receive video, and another for the Raspberry Pi to forward the commands to the Arduino and send video directly from the Raspicam to the PC. This will be done over WiFi to make the robot completely cordless, and with better range than if I went with Bluetooth (and better security!).

This is just the initial programming of the robot. I’ve tried to keep everything as simple as possible to assure that it all works.

Next step will be to get the Raspberry Pi on the robot and connect the Arduino directly to it. I’m currently experimenting with sending live video from the Raspberry over Python. The next update will hopefully focus on this, with the robot controlled over WiFi from a laptop.

Working through the book Arduino Workshop by John Boxall I’ve finally come to the chapter describing how to build an Arduino Tank Robot. However, instead of buying a premade robot chassis I decided to make it out of Lego Technic instead, something I played a lot with as a child.

This presented me with some interesting challenges, first of all, how to interface the Lego Power Functions motors with the Arduino. Luckily, I’m not the first one doing this stuff, and I quickly found a great blog detailing how to cut the motor cables. As I didn’t want to permanently destroy the great Lego set I had just bought (the 42042 Crawler Crane), I bought some new cables and an extra motor from Lego.

Preparing the cables was easy: cut them, strip and tin the two outer wires for the battery pack (+9V and GND), and the two inner cables for the motors. 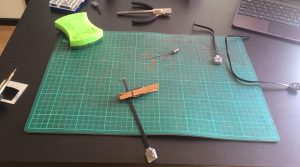 Cutting the cables (Lego fans should look away!)

To check if it all worked, I built a quick circuit with a TIP122 transistor according to this Arduino tutorial (though a bit simplified, I didn’t really need the switch). It worked perfectly, and I was able to control the motor speed with some simple PWM code. Next step was to run 2 motors off the Adafruit motor shield. As you can see in the video below, it all worked perfectly. 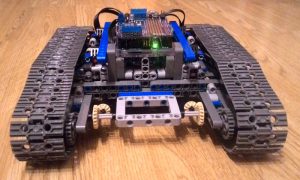